The work of Peggy Zehring inspires many people, from her students to art collectors around the world.  The exhibition, Peggy Zehring In Process, features her multi-media bas-reliefs, and some collage paintings from 1986 through 2010.  Zehring’s intent is straight forward as she explores truth – mentally, physically, psychologically, emotionally and spiritually.  Thirty years ago she began her exploration taking bits and pieces from various cultures as she visited spiritual sites and nature reserves on every continent.   The two main components that echo through the works are her reliance on feminism and her adherence to the Japanese principal of Wabi-sabi.  One cannot escape noticing that Zehring’s form is transient – it is as if the works are about to get up and leave this world for the beyond.  The materials, taken from the earth, lack the brush stoke, as she applies ash, sand, dust, sawdust, and other found objects that suggest this transfer of energy.  Her stroke derives from her strong discipline as a T’ai Chi Chuan practitioner and teacher. 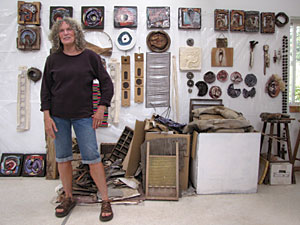 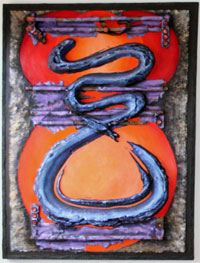 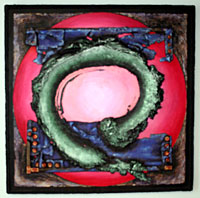 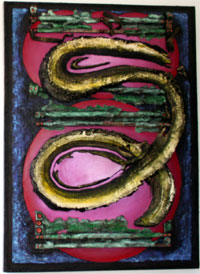 Garnered from her homage to Wassily Kandinsky is Zehring’s full-body stroke. She is not interested in the eye-to-hand activity that mostly consumes the visual artist. Using her full body, with no preconceived notion of what art is or what it may become, she enters each space of her new work as a novice, a clairvoyant, dependent on transcendence through her meditations and studies. These include the Golden Mean Proportion, Sacred Geometry, universal symbols, sounds, language and, most importantly, ancient wisdom encountered at archaeological sites in Thailand, Egypt, China, Israel, India Nepal, Peru, Guatemala, Mexico, Honduras and the American Southwest.

Not surprising, Zehring’s heritage is part Native American, Cherokee to be exact.  Zehring's childhood prepared her for a deeper understanding of life and the transcendent, as she, the daughter of a forth-generation funeral director, witnessed the passing of loved ones as the natural order of the universe, not something to fear.  Her mother prepared the hair and make-up of the dearly departed.  Zehring’s works speak of this communion with something deeper.  In the 1970’s she wrote, “I am using paint to explore the idea that what we usually see is illusion: that the dream is more real than the dreamer.  I consider my painting to be landscapes of the heart, mind and will.”  Although aesthetically pleasing and inviting to the viewer, there is something more to these bas relief(s) than meets the eye.

The Ash Studies, created between 1986 and 1987, are influenced by her experience visiting Teotihuacán in Mexico.  Zehring commented, “Since I returned, I have been working with Mount St. Helen’s ash, found objects and handmade paper.  The volcano that destroyed Teotihuacan is part of the earth’s cauldron which yields treasures not unlike those which erupt in our dreams.”

As a teacher and an artist, her inspiration has been largely through the works and writings of Wassily Kandinsky.  Kandinsky searches, as does Zehring, for individual meaning through art making.  He relied on his unconscious reflections of visual memory.  Kandinsky and Franz Marc created a group called the “Blaue Reiter,” named after a painting by Kandinsky, which demonstrated his search for a spiritual reality in art.  “The Blaue Reiter Almanac,” published in 1912, emphasized the idea of multi-faceted art styles, folk and primitive art, children’s sketches, Asiatic, African, Medieval Woodcuts and sculpture.  Although there is no evidence that Kandinsky was directly influenced by primitive art, it was in the ideas of ritual and the spiritual as related to the primitive experience that may help in understanding the connection between his and Zehring’s philosophy.

Kandinsky's approach to primitivism, which helped inspire him to turn inwards for imagery, has deeply affected Peggy Zehring.  Her mixed-media art works begin with one step in journey of thought, meditation, finding the objects and inspiration and sketching the plan to be completed in one quick sweeping body movement application of materials.  Her spontaneously but well thought out works, necessitate certain conditions to evolve in the manner they do.  She, as Kandinsky before her, has a following of students who learn or as she says “teach her.”

Kandinsky and Zehring, through their search of many cultures’ spirituality and symbolism, developed a unique style of art making.  His is more connected to the visual world; hers the ethereal.  The most intriguing component of her philosophy is her application of paint and other materials to “explore energy systems which lie behind what our eyes see.  These energy systems manifest in color and light patterns which are referred to as 'chakras' when they are related to human beings.”  Zehring wrote about her approach in the 1970’s.  Today, she is still on the same path, exploring this concept repeatedly but always with a new and vibrant twist.   The following excerpts from the documentary filmed in Zehring’s studio in June of 2010, by videographer Kenny Schneider, attempts to unravel some of the mysteries of her process, intention and aspirations.  The script is written verbatim not quoted exactly all of the time, to make for a more concise dialog.  The film in its entirety premiers at the Fox Theater on October 28.

Cocchiarelli: Peggy, you have spoken about your connection to Kandinsky, and as an introduction to your documentary I would like to discuss his development of his ideas in art as they relate to you today well over one hundred years later.  Part of Kandinsky’s intention and his group was to publicize their philosophy in the“Blaue Rider Almanac,” first published in 1912.  It emphasized the idea of multi-faceted art styles, folk, primitive, children’s sketches, Asiatic, African Medieval woodcuts, and ritual sculpture.  Although there is no evidence that Kandinky was directly influenced by primitive  art, it was in the ideas of ritual and the spiritual as related to the primitive experience  that relates to your process.  Kandinsky suggests in his published work of 1912 Concerning the Spiritual in Art that art learns from the objective world and enters a new subjective realm based on the artist’s inner needs.  He was “concerned with the spiritual welfare of mankind.”  He was not interested with political or economic renewal but instead in Kandinsky’s words “the spirit that will lead us into the realms of tomorrow, when mankind would be concerned with feelings.”  His language of colors and forms were meant to represent universal truths as arranged on the canvas in an attempt to bind us as people through a universal art language. In your work we see forms in nature found in our world and then abstracted.  Are you attempting a new language and if so for what purpose? In this interview we are asking you to elaborate your methods, philosophy of teaching and generally comment on what fuels your creative spirit.

Cocchiarelli: Elaine deKooning’s paintings are full of spontaneity and improvisation not remotely finished or suggestive of completion, in other words, the style of 2nd generation Abstract Expressionists of the 40’s.  Her later portraits included in a show at Salander-O’Reilly Gallery in 1999 were describes by poet Bill Berkson as “10th St. touch, nervily loose, sketchy, grooved, juicy to overflowing” E deKooning’s portraits owe much to the respect she showed to her sitters to make something substantial a “perfectly organized pictorial composition.  At times she worked in a classical style especially in her earlier works influenced by Willem (her spouse).  The idea of subject or content was highly debated by the 1st generation Abstract Expressionist (as in art this was a reaction to WW11 and the 1st time ever the possibility of human anilation.)  This was never really resolved for the 2nd generation and especially Elaine the “subject” became an absolute necessity.  Also became a means of imposing order and coherence on a painterly practice in conflict with the realm of immediate experience.  Content in art becomes very important for Elaine but in your work I don’t think that is of much concern to you?