Monumental Paintings from the early 1980’s 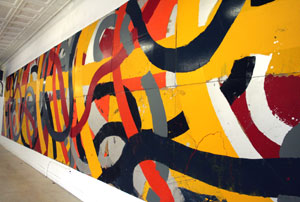 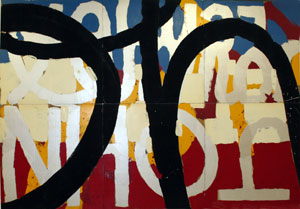 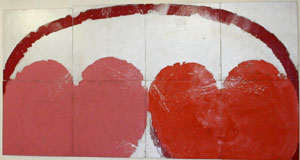 Brendt Berger was born in Oakland, California seventy years ago.  He has had a prolific career as a painter, printmaker and public artist.  For the last five years he has concentrated his efforts on the establishment of The Museum of Friends Contemporary Fine Arts Museum in Walsenburg. The notion of community has been the focus of all his endeavors in the art world, so it makes sense that he took on a new challenge when most would relax into retirement.

Berger's Hawaiian roots are evident in his more recent works. On view are some of his monoprints that reflect this heritage.  In the Monumental Paintings show he relies on his formal training as a painter using color, form and composition to express his creativity as his life unfolded in the 1980’s while living in New York.

“Dilworth’s Rib” is a memorial to Berger’s dear friend and poet Dilworth Faber, a street poet also known as the Penny Man.  This work in particular would need more space to see it in its entirety, but due to the height of the ceilings one whole panel across the top had to be omitted.  A reproduction which accurately portrays the whole work measuring 15’ x 50’ is presented in proximity to the work.

John Baur, Director Emeritus of the Whitney Museum of American Art, in New York City wrote about these works about the same time they were being created:

“Brendt Berger’s big abstract paintings – nearly always heroic in scale – have a gravity, a seriousness, a felt quality.  They are formally rich, but never decorative.  They speak from the heart, and indeed the newest series, done while his father was dying, are literally hearts that have become abstractions of feeling – hearts that are twists, that well, that subside into darkness.  They are moving images as well as abstract paintings of great serenity.”

In the early 1970’s Berger became a founding member of an alternative group of artists known as the Sun Spot Family Association located on the Maine coast.  Then in the mid-70’s, upon returning to New York City, he became a founding member of the Organization of Independent Artists whose mission was to create more opportunities for artists by exhibiting art in alternative spaces while trying to establish a national art bank to support living artists.  It was during this time that Berger stumbled on a paint testing facility that offered him nearly unlimited quantities of paint.  When he ran out of his own canvas they provided 300 pieces of packing cardboard in 5-foot squares that became his working surface.

In 1980, Berger was faced with the responsibilities of a new family and the birth of a son - the following year, the death of his father.  The paintings that emerged were very personal and reflected the life and death going on at this time.  He continued to rely on the recycled materials obtained earlier.

The idea of abundance in a time of recession unleashed Berger’s creative spirit.  “It was the experience of having unlimited art materials in a time of no money,” he reminisced. “ I set up a loft on Union Street in Brooklyn in a down-and-out neighborhood that was so uninhabited that the landlord offered a 5-year lease: the first year free with the last year up to 125 dollars per month.”

The “New York art world” was a few subway stops away but his concerns remained personal – working in the studio and supporting a growing family.  The work produced during this period (1980-1989) came right from his heart.  This was unlike the emerging gallery experience, where Minimalism was giving way to Conceptualism.  I had the pleasure to meet Berger about the time this body of work was near completion.  I was struck with his generosity of spirit.  But, I had no idea how intent he was as an artist to make his mark.

“Hawaiian Heart,” “Umbrella,” “John Lennon, and “Ricardo Meets Death at Kuster King” refer to real events in the artist’ life.  One of the most poignant stories is the description the artist gives of creating “Ricardo Meets Death at Kuster King.”  Ricardo, a friend of Berger’s, worked as a mechanic on the Kuster King ice cream trucks across the street from where he lived. One day, while one of the trucks was hoisted up so he could repair it, it slipped, killing Ricardo rather violently.  In this 10’ x 15” acrylic paint on cardboard, in mostly red, black, white and silver, the viewer is struck by the action of the brush stoke, almost knowing something has happened, but the release is felt when the silver paint helps to remove the tragedy from the scene.  “Umbrella”, 10’ x 20’ and “Hawaiian Heart” also 10’ x 15, could reduce the experience into something trite or sentimental, with blatant imagery of hearts, but instead the application of paint in all sincerity defines who Berger is with great conviction and joy.  Events in his life leading to the death of his father were explored in such a way that 30 years later they still resonate with the viewer.

“John Lennon” 10’ x 15’ also recounts an actual event in the artist life.  Faced with the cruel and untimely death of a cultural hero, (Lennon was murdered in 1981 while exiting his car in front of his apartment building in New York).  “Well, I thought John Lennon was a great artist and I had great respect for Yoko, an artist and poet in the Fluxus Group, before she and John became a couple.  We had a number of friends in common, he bought my downtown Broom Street studio, and his son lives there today.  When, he was murdered, I had to paint about it.”  The homage to Lennon is one of the most fluid works in the show; the defining moment of his death is played out with the final layer of black rolled on paint that concludes a creative life.

Today, the artist continues work on a personal narrative begun in 1993 while living in Honolulu and now numbering well-over 100 paintings 5 x 6 and 6 feet square.  These works explore in depth Berger’s great love of his Hawaiian heritage and ancestry.

“The idea of intention is very important – I want to breathe life into my Hawaiian culture while expanding the limits of my western heritage.  Yesterday, I read a quote in the Hawaiian Newspaper Ka Wai Ola that goes to the heart of how I feel on the subject of intention.  In describing the recently departed great Pacific Navigator, Mau Pailug, his student, Nainoa Thompson, said 'he showed us his ability to focus, pay attention and not get distracted.' These few words describe intention powerfully.”

Recently, Berger showed his newer works at the Parkside in La Veta, titled “Making Transparent.”  The title refers to the process Berger feels he is undergoing in his current life, in relation to his work as the MOF co-founder and curator, handyman, and fund raiser. In essence, he is a visionary who chose to leave all that he knew behind and forge a new existence in the small town of Walsenburg.

Why create a contemporary art museum in Walsenburg?

“A very interesting question, I think about this challenge almost daily,” Berger said. “Some people complain that we are laying our trip down on people who don’t care and really don’t want a contemporary art museum in Walsenburg, almost suggesting that we take our abstract art back to where it came from.  I see great value in whole human beings, those who have learned enough not to be threatened by new experiences.  Art is like this in that it expresses the depth of the experience, the skill of those doing it and, in the case of MOF, multi-nationals from nearly every possible place on the globe.  Getting back to Mau Pailug, the great navigator, the more knowledge and experience one has of the physical world, the more you can go forward in to the unknown with confidence in one’s life.  Creating art shows one this path in all it diversity.  The children who continually visit the museum, talk, and make art... they see its value.”

So what does this mean for the Museum of Friends and its future?

“Well according to Nina Simon, author of the blog 'Museum 2.0' and book 'Participatory Museum,' a successful museum will be one that people see as a community place, like the local coffee shop or library – not a place they visit just one a year.” Well on that note, our conversation ended but the journey still continues.  Please visit us for our public programs and events listed on our card.