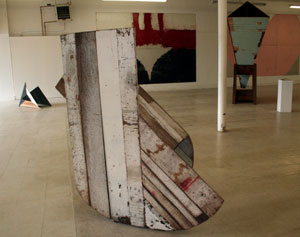 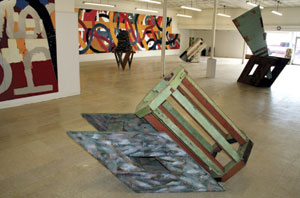 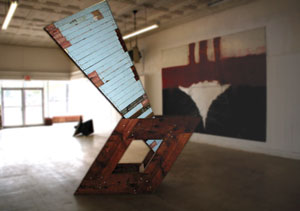 Much has been written about the life and work of sculptor Linda Fleming.  Born in Pittsburgh, Pa., she has taught at The California College of the Arts from 1986 to the present as a Full Professor and Chair of the Sculpture Department. She has roots in the Huerfano County going back to the 1960’s.  As a founding member of the Libre Community of Artist(s) she and Dean Fleming helped to build a place in the world where art making was the focus of their lives. Since that time, she has traveled the globe seeking impetus for her work.  In 1990, she and Michael Moore purchased a building in Walsenburg, thereby investing in this community and securing space to keep their work and archive their history.  I met Linda about four years ago at Libre, but in my research found that our paths have continually crossed over the last few decades.  It was my pleasure to select works to include in our first exhibition on the first floor of MOF.  I admire Fleming as an artist and as I read I found that she shares many of the ideals of the mission of the Museum of Friends.  In a conversation with Fleming I was able to uncover some of the reasons for her art making and what makes her tick as a contributing member of society.  The following dialog may shed light on the works on display in MOF’s inaugural exhibition at 600 Main Street.

Cocchiarelli: Early in your career, in 1969, you delivered a series of public lectures with five other members of Libre beginning at Alloy, a conference created by Steward Brand, Steve Durkee, and Steve Baer at the Ghost Ranch in New Mexico, and including the National Institute of Mental Health in Washington, DC., Washington U in St. Louis, Cranbrook Academy, Columbia University, School of Visual Arts, The Corcoran, SUNY Purchase, and Rochdale Free University in Toronto.  One year earlier you married Dean Fleming, founded the artist community, Libre, on 360 acres of land outside of Gardner, Colorado.  In your biography you commented “the straight line turned into curves and industrial forms morphed into lace.” I considered what was happening in 1969 in the art world and how women were not really a part of it.  Would you consider that the reason your work has become more curvilinear, lacy or perhaps feminine is due to your incredible success as a sculptor, professor, and lecturer? Perhaps, you had to maintain a stance that was more masculine? Hard edged, industrial?  Now, in 2010 you are free to explore your more feminine side?

Fleming: I love geometry, constructions; work attributed usually to men is innate to me.  It was hard for me in the 1980’s when the art world felt that works made by women should be ephemeral, small in scale, and not of permanent materials.  I was exploring other issues.  Even in school my favorite art was that of the Russian Constructivists, and nothing was happening like that then.  Yet, I continued to explore building and structure even though what I was making was somehow counter to the current trends.

Cocchiarelli: In 1983, your old hero Buckminster Fuller “spoke” to you while watching a video in which he advises one to use ones’ skills “by finding what needs to be done and doing it.” If he were alive today how would you imagine that he would respond to being the inspiration for the incredible work you have accomplished – building the dome at Libre, being a founding member of Libre, your interest in geometry, your prolific output and the scale in which you produce sculpture continually no matter what is happening in your life?  Would this be in keeping with Fuller’s philosophy of finding what needs to be done and doing it?

Fleming: Buckminster Fuller was more involved with solving the problems of habitation and transportation using the latest technologies but he genuinely believed that each person has their own talents and skills, and if you began using them you can fulfill your place in the world.  He was a friend with many artists but I don’t know if he would personally approve of my work.  I feel I was drawn to him for his notions of geometry, and my current works are a type of generative geometry or biological geometry: forms that grow out of each other.

Cocchiarelli:  Referring to the new work as you do as the “lace” work - do they have anything in common with “fractals”?

Fleming:  I am not working with formula(s), I don’t know any math in relation to these sculptures I am investigating these ideas in my mind and discover new forms. They grow out of my observations, ideas, dreams, life, and they happen to be geometric.

Cocchiarelli:  In terms of Buckminster Fuller, his need to change lives with low cost materials, and construct housing that would affect the lifestyles of people, I am going to take a leap of faith, in asking you your philosophy regarding social change.  In regards to your decision to invest in Walsenburg in that your sculptures on view at MOF are from 1988-1992 this time period almost coincides with the date that you purchased a building in town to house your archive, sculptures?  Similarly, it was a leap of faith for you to show your work with the Museum of Friends in Walsenburg, as you currently have a number of exhibitions in more progressive cities.  The following questions relate to the idea of “social radicalism through the arts.” How do you see art as a positive part of this town evolving?  Do you see that it’s a place for artists to live and somehow this will encourage social design or change? Have things changed for you since the 90’s here in Walsenburg?  What is our role as artists in a community?

Fleming:  That’s a really good question because I think that obviously the Museum of Friends has a presence, a big role in that you and Brendt are engaged in this community and you know all the business people, shop owners, artists.  Art of course is often considered on the fringes of society except to the very wealthy that see it as the most valuable material ounce for ounce in the world.  They believe it is important for society.   When you are dealing with most people it is generally not on the top of the list.  In the case of Walsenburg and MOF, presenting exhibitions of contemporary art can be a very affirmative act.  It gives credibility to art making and allows people to become familiar with the concerns of artists.   I think MOF is teaching by example.  Art engages all of the senses, and by knowing about artists who have dedicated their whole lives to making art; it opens up that possibility that both old and young can be affected by the experience.   Seeing these forms, three dimensional structures, paintings with colors and shapes, provides a physical presence that changes the environment.

Cocchiarelli: One of my favorite parts of the research that I read of your thoughts is a letter you wrote, “to make.”  You said, “Making creates a physical place where I can move ideas around like kids play with blocks.”  The concept of play is important to you, and also being in nature I read also that the expanse of Libre is important to your inspiration, would you speak about that?

Fleming: On the one hand we started this community Libre as a way of experimenting with how we could organize ourselves to share the land with others in a humane way and be in nature.  But, what we really were doing was finding a way to make art.  I had no idea how successful that would be.   Beyond the social structure, having a physical place that is so extraordinarily beautiful has allowed me to really see it.  The minute I get here I can completely enter a kind of mindset.  I see what is happening on the minuscule level, when a plant encounters an obstacle in its growth or the way that the sun moves across the valley or the way the moon rises or the clouds – the gigantic to the small allow me to enter that space that I talk about in my art making.  This is where I am thinking outside of the daily life, and yet, its so interesting because I am getting more into the daily life by being here – by going through that door I am able to see things in a much different way than when I am immersed in the city life.

Cocchiarelli: The following quote is taken from your catalog “Tangible Mind” from the exhibition “Sculpture 1991 to 1998”.  This was seen at the Capitol Art Foundation, State Capitol Concourse and the Museum of Fine Arts, Museum of New Mexico, Santa Fe from July 1998 through 1999.  In the following excerpt you state how this magnificent place has changed your life and your perspective.

“The country transforms how I act and think.  I can hike through time and space in the brain.  Thirty years ago we came to Southern Colorado trying to make a community, and inadvertently created a physical place where interior landscapes can be explored, where roaming ideas and bits of information can cross the paths of other species of thought.  There is room for all the half-formed notions, sudden perceptions, and glimmers of insight crammed into my psyche from months in the city) to untangle themselves and bask in the sun.  It is a place for embarrassingly galactic thoughts and astounding minutiae. “Yesterday, watching the sunset from the cliffs over Dry Creek, I looked down on a golden eagle as it carved the space and hung in the air with the slightest shift of a feather…Funny to see the top of his head.  Today I saw the red ants dragging chunks of dead insects through the low navel-like hole that serves as the entrance to their perfectly shaped mound of same-size rose quartz grains dragged from where inside the ground? The surrounding surface? and stacked by the billions to form their own pyramid of Giza. “The sheer size of this place had made it possible for me to think about working big.  I wasn’t compelled to challenge the scale of the mountains, I simply had the room to see what would happen if my work became larger than me.”